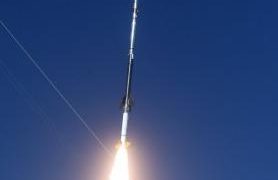 On April 11, 2019, the Chromospheric LAyer Spectro-Polarimeter (CLASP-II) sounding rocket experiment was successfully carried out from the NASA facility at the White Sands Missile Range in New Mexico (USA).

The goal of CLASP-II was to provide new spectro-polarimetric observations of a particular layer of the solar atmosphere, the chromosphere. This complex region is at the core of several key problems, and its investigation is today one of the main priorities in solar physics research. Although there are clear indications that the magnetic field plays a key role in the physics of this region, our knowledge about the magnetism of the chromosphere is still very limited. Solar magnetic fields can be investigated by exploiting the signatures that they leave in a particular property of light: the polarization. CLASP-II succeeded in providing unprecedented measurements of the intensity and polarization of ultraviolet light emerging from the upper chromosphere. These unique observations will now be exploited to get new precious information on the strength and orientation of the magnetic fields present in this region of the solar atmosphere. This kind of information is crucial for understanding, for instance, the physical mechanisms that trigger high-energy solar phenomena, like flares or coronal mass ejections. If directed towards the Earth, these explosive events may be dangerous for astronauts, or may damage the electronic devices aboard satellites, on which our technology-dependent society strongly relies.

Solar radiation at ultraviolet wavelengths cannot be observed from ground, and for this reason a suborbital rocket experiment has been proposed within the framework of the NASA’s Sounding Rocket Program. Sounding rockets are simpler and more affordable than satellite missions, and offer a great opportunity to scientists to test new ideas and achieve rapid results. CLASP-II was launched on Thursday, April 11, at 12:51pm (local time) from the White Sands desert in New Mexico, aboard a NASA’s Black Brandt IX sounding rocket. The rocket reached an altitude of 170 miles (about 273 km), before descending by parachute. The payload was recovered in good condition. The measurement was perfectly performed during the five minutes of observation: both the pointing system and the spectropolarimeter worked very well. A first analysis of the data has shown a good agreement with the theoretical predictions.

The contribution of IRSOL to the experiment will start now, and will concern the theoretical interpretation of the CLASP-II data, with the aim of extracting as much information as possible on the magnetism of the upper solar chromosphere. This work will involve various Institutes, and will be led by Prof. J. Trujillo Bueno (the CLASP-II principal investigator of the IAC). A SNSF “Sinergia” project led by IRSOL (Dr. Luca Belluzzi, CLASP-II team member), ICS (Prof. R. Krause) and IAC (Prof. J. Trujillo Bueno), with partner ASCR (Dr. J. Stepan, CLASP-II team member), is expected to provide novel radiative transfer tools for the theoretical and numerical modeling of the CLASP-II data.