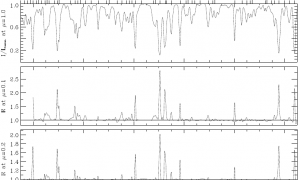 IRSOL > News archive > New entry in the data archive: Atlas of the Third Solar Spectrum and its Center to Limb Variation