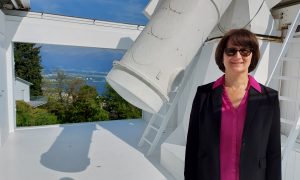 Prof. Dr. Svetlana Berdyugina has been appointed as Scientific Director of IRSOL Istituto Ricerche Solari “Aldo e Cele Daccò” in Locarno and affiliate Professor at the USI Faculty of Informatics in Lugano, Switzerland. “I am looking very much forward to re-engaging myself within the Swiss scientific community and exploring new synergies in Ticino”, she says. She will succeed Michele Bianda who led IRSOL for almost 35 years.

The Foundation IRSOL (FIRSOL) has unanimously appointed Prof. Dr. Svetlana Berdyugina as Scientific Director of IRSOL Istituto Ricerche Solari “Aldo e Cele Daccò” in Locarno starting from May 1, 2022. In coordination with this appointment, the USI rectorate has offered Prof. Berdyugina also an adjunct professorship at the Faculty of Informatics, where IRSOL is affiliated as a research institution.

Prof. Berdyugina will succeed Dr. Michele Bianda who led IRSOL for almost 35 years, since the institute was officially acquired by the foundation FIRSOL, and who by now reached the retirement age. Under his leadership the IRSOL telescope and instrumentation were upgraded and further developed in a close collaboration with the Institute for Astronomy at ETH Zurich, directed by Prof. Dr. Jan Stenflo until his retirement in 2007. This collaboration brought IRSOL to a forefront in the field of solar spectropolarimetry as a key developer and the homebase of the most precise imaging polarimeter ZIMPOL. In 2012, IRSOL was recognized as a research facility of national importance which allowed hiring prominent scientists with long-term prospects as well as postdocs and PhD students on several competitive funds. Following this success, IRSOL was first in 2015 associated and then in 2021 affiliated with USI.

IRSOL research is focused on solar magnetism and is based on the development of theoretical models, numerical simulations, instrumentation and observations. The latter make use of state-of-the-art instrumentation for high precision polarization measurements and in particular the ZIMPOL polarimeter, which is developed and maintained in collaboration with the University of Applied Sciences and Arts of Southern Switzerland (SUPSI). The measurements are carried out in Locarno as well as in dedicated campaigns at the Europe’s largest telescope GREGOR in collaboration with the Leibniz-Institut für Sonnenphysik (KIS). Based on this experience, IRSOL has contributed the polarimetric unit to the first-generation instrument VTF for the world-largest solar telescope DKIST (USA) and participates in the European Solar Telescope (EST) project which aims to develop a next generation European 4m-class solar telescope by a broad European consortium

Prof. Berdyugina is well known for her interdisciplinary research in solar physics, astrophysics and astrobiology using a rarely utilized property of the light – polarization. While employing quantum effects in molecules, magnetic fields and radiation, she pioneered and established several innovative research lines to study magnetism of the Sun, distant stars and relativistic stellar remnants, as well as planets outside the Solar system (exoplanets) and signatures of extraterrestrial life and civilizations which might be detected on Earth-like exoplanets. As a graduate and PhD of the Faculty for Mathematics and Mechanics of the St.-Petersburg State University, she applies various numerical approaches in her research, with a focus on solving inverse problems, allowing us to “see” hidden phenomena in the Universe.

Among her prestigious appointments are Professorship at the Federal Institute for Technology ETH Zurich, as a winner of the European Young Investigator (EURYI) Award of the European Science Foundation (ESF) with the support of the Swiss National Science Foundation (SNSF), Professorship at the University of Oulu, Academy Investigator of the Academy of Finland, and NASA Astrobiology Institute Research Fellow at the University of Hawai’i. She is also a winner of a highly competitive European Research Council (ERC) Advance Grant. Currently, she holds a full professorship at the University of Freiburg and is the managing director of the Leibniz-Institut für Sonnenphysik (KIS) in Freiburg in Breisgau, which she will continue along with her new appointments at IRSOL and USI.

Thanks to her vast expertise in research and scientific management, Prof. Berdyugina has served on many international panels and commissions in Europe and beyond, among others as the Chair of the Board of Directors for the European Solar Telescope (EST), Vice-Chair of the Observational Programmes Committee at the European Southern Observatory (ESO), and as a member of the Scientific Committee of the International Space Science Institute (ISSI, Bern), Committee on Space Research (COSPAR) in Germany, Prize Jury of the Leibniz Association (Germany), Association of Universities for Research in Astronomy (AURA, USA), and others.

Her creative nature takes over the right side of her brain as well. She continuously expands her solar, stellar, terrestrial and extraterrestrial vision through her colorful paintings. She is excited about this fusion of science and art that leads her to new discoveries. She is also passionate about sharing her knowledge with her colleagues, students, young scientists and public, and she was invited to speak about her research and vision at TEDxMaui, Urania Berlin, UNESCO Night of Philosophy in Paris, Euronews, etc.